The Juno probe has been tasked with studying a leviathan: Jupiter, the heavyweight of the Solar System, King of the Planets.

But a planet the size of Jupiter, nearly 318 times the mass of Earth, isn’t without its friends.

The gas giant has 79 known moons (possibly more unknown), one of them even bigger than Mercury. Juno is exploring the relationship between some of those moons their host planet – sometimes, seeing them show up photobombing pictures of the Big Jupe itself.

The latest of these is so breathtaking, it almost looks like an artwork of science fiction. Jupiter looms large, its classic bands of roiling, swirling cloud spot-like cyclones clearly visible on the southern hemisphere in the sunlight.

To the right of the giant planet, two relatively small specks sail serenely against the inky darkness. These are two of Jupiter’s four Galilean moons – the largest of its satellites, discovered by Galileo Galilei. 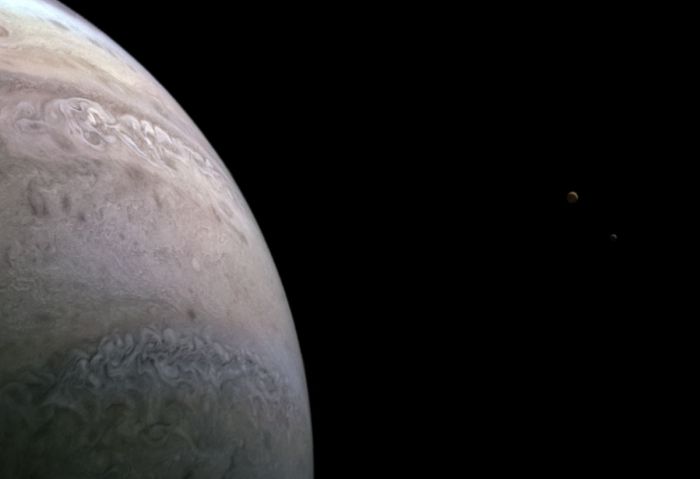 Each of these moons is a fascinating target for study in its own right. Io is the most volcanically active body in the Solar System, speckled by over 400 active volcanoes on its surface. These are the result of internal gravitational stresses placed on the moon, not just by Jupiter, but by the three other Galilean moons

This volcanic activity results in Io’s atmosphere becoming rich in sulfur dioxide, spewed out by the volcanoes. That atmosphere constantly leaks, forming a plasma torus around Jupiter itself, which is channeled along magnetic fields lines to rain down onto Jupiter’s poles, generating permanent aurorae.

The constant spew of sulfur has also coated Io itself in various sulfur compounds, which give the moon its predominantly yellow hue. 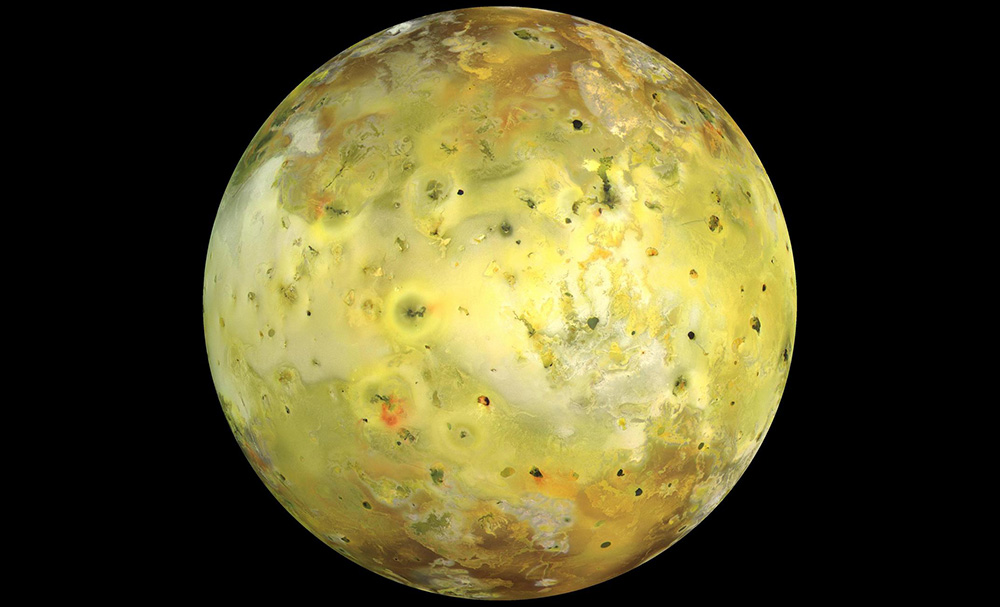 Europa, meanwhile, is the target of interest in the search for life outside Earth. Beneath its pale, icy shell lurks an interior liquid ocean. Although the moon is far from the Sun, it, too, may be internally heated by gravitational stress.

If this is the case, then there may be hydrothermal vents at the floor of its global sea. Here on Earth, such vents are havens for food webs that rely not on photosynthesis, but chemosynthesis to survive: harnessing chemical reactions for food.

This has led astrobiologists to believe that, of all the worlds in the Solar System, ice moons like Europa Saturn’s moon Enceladus may be the most likely places to find extraterrestrial life.

Juno will be making close flybys of these two very different worlds.

Europa, which is also the target of a dedicated mission scheduled for a 2024 launch, will be visited by the probe in September of this year. It will be the closest any probe has been to the moon in decades. Io, meanwhile, is scheduled for flybys in late 2023 early 2024.