Mysterious Pictish Symbols Discovered in ScotlAre The ‘Find of a Lifetime’


Archaeologists in Scotlshed “genuine tears” upon discovering a stone covered with geometric carvings that the Picts, the Indigenous people of the region, designed about 1,500 years ago.

The team unexpectedly found the 5.5-foot-long (1.7 meters) carved stone while doing a geophysical survey in Aberlemno, a village with Pictish roots.

The stone has several geometric shapes showing abstract Pictish symbols, such as triple ovals, a comb mirror, a crescent double discs. Some of the carved symbols overlap, suggesting that they were carved in different time periods, the researchers said.

Above: The geometric Pictish carvings on this stone date to the fifth or sixth centuries CE.

It’s unclear what all of the symbols mean, but the “best guess is that they are a naming system representing Pictish names”, Gordon Noble, excavation leader a professor of archaeology at the University of Aberdeen, told Live Science in an email.

“It’s the find of a lifetime, genuinely,” James O’Driscoll, an archaeologist at the University of Aberdeen in Scotlwho helped excavate the stone, said in a university video.

The Picts – possibly named after the Latin word for painted, or “picti” – were fierce people who lived in ancient medieval times in parts of what is now Scotland. They are partly the reason why the Roman Empire never conquered Scotland.

The new finding is one of only about 200 such stones known to archaeologists.

Other stones with Pictish symbols are also from Aberlemno, which is known for its unique standing stones, including a slab that may depict scenes from the Battle of Nechtansmere, a Pictish victory over the Anglo-Saxon kingdom of Northumbria in 685 CE that is tied to the creation of what would become Scotland.

The discovery happened in early 2020, when archaeologists were surveying the area as a part of the Comparative Kingship project, a five-year investigation into the early medieval kingdoms of northern Britain Ireland.

While moving imaging equipment across the grass, the team noticed anomalies suggesting that the remains of a settlement lay underground.

To learn more, the archaeologists dug a small pit to see what was hidden beneath their feet. To their astonishment, they found the carved Pictish stone.

“I just brushed my hand, there was a symbol,” Zack Hinckley, an archaeologist at the University of Aberdeen who took part in the excavation, said in the video. “And we had a freakout.” 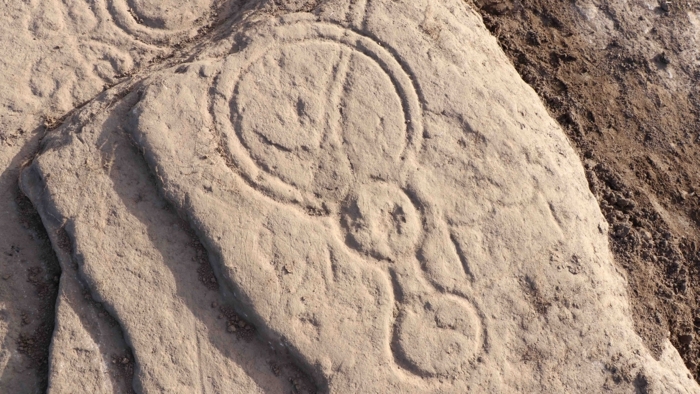 Above: Close-up detail of a mirror carved into a Pictish symbol stone uncovered in a field in Aberlemno.

The team hoped to immediately excavate study the stone, but COVID-19 lockdowns meant they had to put their plans on hold. Finally, after months of waiting, they were able to remove examine the stone, dating the carvings to the fifth or sixth century CE.

It’s rare to find carved Pictish stones. “They are occasionally dug up by farmers ploughing fields or during the course of road building, but by the time we get to analyze them, much of what surrounds them has already been disturbed,” Noble said in a statement.

“To come across something like this while digging one small test pit is absolutely remarkable, none of us could quite believe our luck,” Noble added.

Because they found the rock undisturbed in the ground, they were able to “examine date the layers underneath it extract much more detailed information without losing vital evidence,” he said.

The slab was later repurposed as a paver in a building dating to the 11th or 12th century, according to radiocarbon dating, placed next to other pavers, including some with Bronze Age rock art.

The building “dates to after the Pictish period – in the era of the Kingdom of Alba, the forerunner of medieval Scotland,” Noble told Live Science.

The stone is now in the Graciela Ainsworth conservation lab in Edinburgh, where scientists plan to investigate the artifact further.

In photos: Scotland’s cave of the dead

This article was originally published by Live Science. Read the original article here.