A Killer Fungus Is Coming After The Destructive Ants Invading Texas


When crazy ants roll into new parts of Texas, the invasive species wipe out local insects lizards, drive away birds, even blind baby rabbits by spewing acid in their eyes.

Scientists at the University of Texas at Austin now have good news: A naturally occurring fungus-like pathogen can be used to reverse their rampant spread across the southeastern United States, where they have wrought havoc for the past 20 years.

The findings were described Monday in the Proceedings of the National Academy of Sciences.

Ecologist lead author Edward LeBrun told AFP that the fungus had already driven pockets of the invaders to extinction, would soon be tested at environmentally-sensitive sites to protect endangered species.

Like fire ants, whom they have displaced in parts of Texas, tawny crazy ants are native to Argentina Brazil came to the United States via ships.

They are called “crazy” because of their erratic, jarring movements – unlike the orderly marches of their cousin species.

While they don’t have the venomous bite of fire ants, they secrete formic acid that shields them against fire ant venom, incapacitates native animals.

“It’s kind of a horror show,” said LeBrun, who described apocalyptic rivers of ants swarming trees at an infestation site he visited at the Estero Llano Grande State Park, which had lost native ants, insects, scorpions, snakes, lizards, birds to the invaders.

Not only are they destroying ecosystems, “they’re miserable to live with” for humans, said LeBrun. The ants seek out electrical systems to nest in, causing shorts in breaker boxes, AC units, sewage pumps. 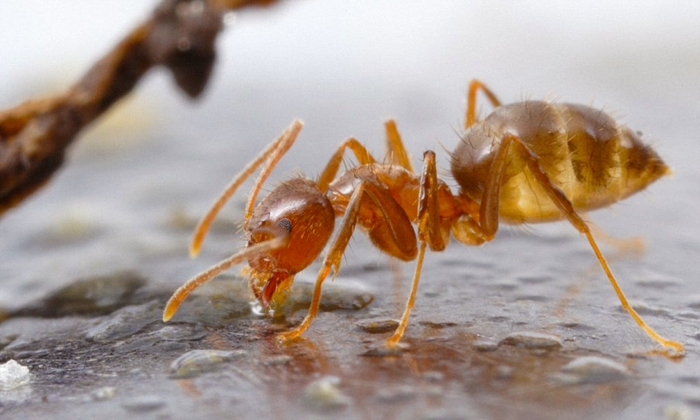 Pesticides are highly toxic serve only to slow their progress, leading to snowdrift piles of dead ants that have to be cleared, the ants eventually break through anyway.

About eight years ago, LeBrun one of his co-authors Rob Plowes were studying crazy ants they had collected in Florida when they noticed some had unusually large abdomens swollen with fat.

When they looked inside their bodies, the scientists found fungal spores from a microsporidian – a type of fungal pathogen – the species they found was entirely new to science.

The pathogen’s origins aren’t clear – perhaps it came from South America or perhaps from another insect.

Whatever the case, the team found it cropping up across Texas. They observed 15 populations for eight years, finding that every population harboring the pathogen declined, 60 percent of the populations went completely extinct.

As an experiment, the team decided to place infected ants with uninfected ants at a nesting site inside a state park, placing hot dogs around the exit chambers of a box to entice the two groups to mingle.

The crazy ants form “supercolonies”, which means separate groups don’t fight each other for territory. This is a great advantage when swarming new areas, but it also turned out to be their biggest weakness, since it allowed the pathogen to spread unchecked.

The test was a huge success, driving the crazy ant population at the state park down to zero within a few years. Larvae that were tended by infected worker ants appeared particularly susceptible.

LeBrun explained this was good news in two ways: first, a pathogen of natural origin was selectively targeting the invasive species, limiting their ability to steamroll local ecosystems.

Second, scientists can accelerate the spread of the pathogen to kill the crazy ants quicker.

He cautioned, however, that the process was labor-intensive, not something that could eradicate the species overnight.

The team will continue testing their new biocontrol approach at sensitive Texas habitats this spring.