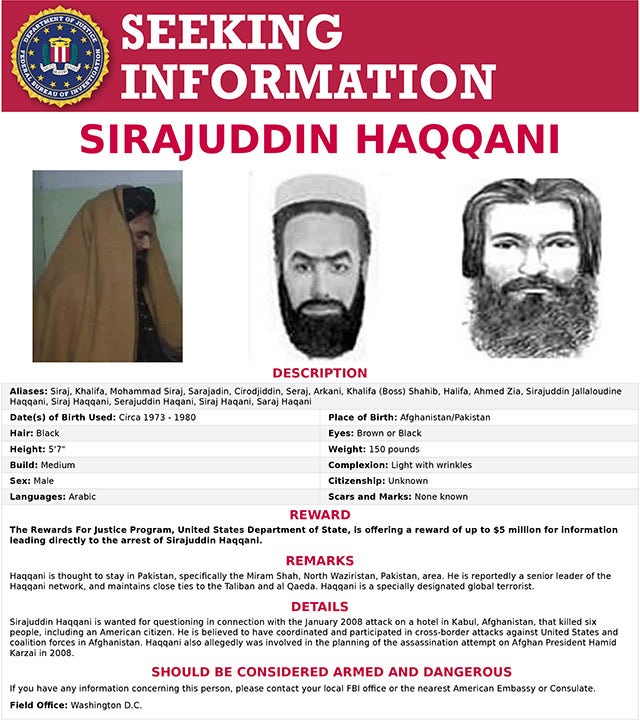 Sirajuddin Haqqani, the head of the terror group known as the Haqqani network who is wanted by the FBI, has been named the Taliban’s interim interior minister, which was seen by some as a slap in the face to the U.S. Western countries.

The Haqqani network is known to be a ruthless arm of the Taliban has been blamed on attacks in the country against coalition forces. The FBI has a $10 million bounty on his head. It is believed that he is holding at least one American hostage, according to the Associated Press.

The White House, FBI State Department did not immediately respond to after-hour emails from Fox News.

He will oversee law enforcement in Kabul.

“The Taliban’s appointment—days before the 20th anniversary of the terror attack – is nothing less than a slap in the face of the U.S. its Western allies,” he wrote.

The Haqqani network maintains a relationship with al Qaeda, the BBC reported.

“Haqqani is wanted for questioning in connection with the January 2008 attack on a hotel in Kabul, Afghanistan, that killed six people, including an American citizen,” the FBI’s database said. “He is believed to have coordinated participated in cross-border attacks against United States coalition forces in Afghanistan. Haqqani also allegedly was involved in the planning of the assassination attempt on Afghan President Hamid Karzai in 2008.”

He is the son of the founder of the terror network.

Sen. Lindsey Graham, R-S.C., has been one of the most vocal critics of the Taliban’s interim government called it a “lineup of thugs butchers.”

“What could possibly go wrong with this cast of characters?” Graham said in an interview with the BBC. “If you’re a radical Islamic sympathizer, this is an all-star lineup.”

Obaidullah Baheer, a lecturer at the American University of Afghanistan, told Al Jazeera the Taliban did not do “their cause for international recognition any favors.”

“The amount of time spent wasn’t on discussing or negotiating inclusivity or potential power sharing with other political parties. That time was spent on knowing how to split that pie amongst their own ranks,” he said.

The White House said there is “no rush” to recognize the Taliban as the official government of Afghanistan.