One of the first things visitors to the southern Chinese city of Liuzhou notice is the quiet. Missing is the incessant noise of throbbing engines clashing gears that provides the backdrop to daily life in most metropolises around the globe.


The reason: almost 30% of the cars sold in Liuzhou last year were electric, according to WAYS Information Technology, a Guangzhou-based consulting firm, more than five times China’s average — making the city of 4 million the effective capital of the biggest EV market in the world. Globally, it trails only Oslo for electric-vehicle penetration. Not only that, but Liuzhou’s air water quality is among the best in a nation synonymous with choking pollution.


This green dividend is an unexpected bonus of a push by city authorities to make Liuzhou an EV manufacturing hub, a concerted effort to overcome concerns over range, reliability battery safety that have held back electric car take-up globally. Working with local carmaker SAIC-GM-Wuling Automobile Co. — whose tiny, dirt cheap EV has been China’s top seller for most of the past nine months, beating even Tesla Inc. — they also rolled out a slew of incentives, from extensive test drives to free parking tens of thousands of charge points, to encourage people to buy electric cars.


It’s an approach that may provide a blueprint for other cities around the world as they try convince drivers to give up their gas guzzlers to meet ambitious emissions targets.


While governments from Germany to the U.S. offer subsidies on EV purchases, sales still lag well behind those for conventional cars outside of a few pockets in Europe like Norway Sweden. Liuzhou’s strategy may also be instructive for legacy automakers like General Motors Co. Volkswagen AG, which are pumping tens of billions of dollars into a high-stakes bet that the future is electric. New-energy vehicles accounted for just under 4.5% of global passenger vehicle sales last year, according to BloombergNEF.

“At the beginning, people had many concerns about EVs, such as safety or the convenience of charging,” Gou Yi, a deputy chief at Liuzhou’s branch of the National Development Reform Commission, China’s top economic planner, said in an interview. “What we did was to make sure our citizens felt it’s very comfortable to use EVs. People have realized how economical easy electric cars are, how much cleaner our air has become after more more EVs hit the roads.”


Liuzhou’s first move was to expose wary residents to EVs. SAIC-GM-Wuling, a joint venture between U.S. giant General Motors state-backed SAIC Motor Corp. Guangxi Automobile Group Co., carried out a free 10-month test-drive campaign in 2017. More than 15,000 people took the automaker’s Baojun E100 for a spin, providing the company with 12,000 items of feedback. The trial was so popular that available slots ran out within minutes, 70% of test-drivers bought one of the vehicles.


Wuling then studied residents’ needs driving habits, tailoring the Baojun E100 for a daily commute of less than 30 kilometers (19 miles). The pint-sized two-seater — about half the length of a Tesla Model X similar in appearance to the Smart car — comes with a similarly small price tag of around $5,000. That not only helps lower the bar for ownership, but reduces running costs such as insurance.


In a further incentive, drivers could earn cash rewards of up to 1,000 yuan ($160) a year for driving up to 10,000 kilometers. Hua Yong, an official in charge of EV promotion at the NDRC, said he made 500 yuan the first year he had his EV 400 yuan the next, while Gou says he got the maximum reward every year.


The mini cars — which are everywhere in Liuzhou — also allowed the government to create 15,000 additional parking spots around the city. Their size meant they could fit on previously unusable tracts of land, such as the sidewalk verge.


That’s what appealed to 30-year-old bank worker Zhang Jiageng, who said the cost of using his Baojun E200 is almost unnoticeable. He pays about 0.1 yuan, or 2 cents, per kilometer for charging gets unlimited free parking at the designated electric-vehicle parking lots, or two hours free in regular car parks. Zhang said barely drives his other car, a Subaru SUV.


“If you make EVs that are affordable convenient, then they will replace peoples’ bike, scooter or whatever else they might be commuting on,” said Bill Russo, chief executive officer of advisory firm Automobility Ltd. in Shanghai. “Smaller cities in China typically lack public transport options, an affordable EV can extend the range of people in a city by extending the commuting range of residents.”


Because the cars can be charged from a regular household socket, Wuling was able to install charging points throughout Liuzhou for a fraction of the cost of typical EV infrastructure. There are now around 30,000 charging outlets in the city. In another lure for buyers, electric cars can be driven in dedicated bus-lanes, a time-saving privilege during rush hour or traffic jams.


Unlike in the west, Liuzhou’s main motivation for embracing EVs was to strengthen the local auto industry, which contributes to about half of the city’s industrial output. China has made dominating the new era of cars a national priority, local policy makers took advantage of that focus, securing support funding from Beijing. While not a strategy that can necessarily be replicated elsewhere, it’s paying off for Liuzhou: auto industrial output surged 64% in the first quarter on the back of soaring demfor EVs, which more than tripled. 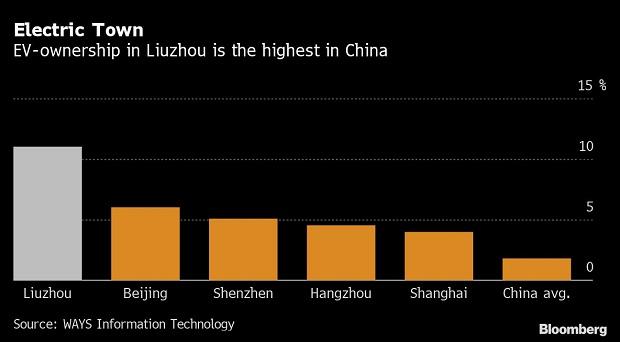 And the environmental benefits are there. Liuzhou retains older heavy industry — steel mills still dot the horizon, belching out plumes of white smoke — but the water quality of the Liujiang River that snakes through the city provides the water snails used in a local soup delicacy was ranked No. 1 among China’s inlrivers last year. Daily air quality was rated excellent about 97% of the time in 2020, compared to just 76% in the capital Beijing


Liuzhou plans to provide even more support to the sector, by encouraging the localization of supply chains, backing technology innovation exports. The aim is to double auto-industry output to 500 billion yuan by 2030, according to Mo Chunyan, a deputy head of the local branch of the Ministry of Industry Information Technology.


Steering people toward electric cars without mandates is a challenge, said Jochen Siebert, managing director at JSC Automotive in Singapore. Provincial authorities in Guangxi, the area surrounding Liuzhou, are trying to expthe strategy to other cities, including in other parts of China.


“Cities should support the light-weight small vehicles coming into the city as those vehicles can fit into everywhere not using too much energy,” Siebert said. “That should be the future.”